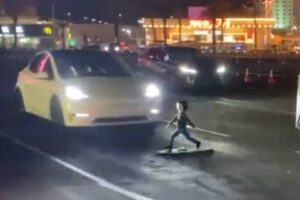 Tesla CEO Elon Musk once called LIDAR a “crutch,” something that automakers would find themselves leaning on in order to solve the problem of self-driving. Soon after, Tesla shifted wholly toward camera-based tech for Autopilot and its available Full Self Driving upgrade. That was, and presumably still is, Musk’s dream of how automated driving should look.

To make vision-only self-driving a reality, Tesla has even removed the onboard radar sensors from the Model 3 and Model Y, a decision that ultimately led to the National Highway Traffic Safety Administration downgrading the vehicles’ safety ratings in May of last year. And to rub salt in a few old wounds, LIDAR company Luminar brought a bold test with it to the 2022 Consumer Electronics Show that put a Tesla up against a LIDAR-equipped vehicle and a few child-sized dummies.

Sitting neatly atop a Lexus RX is Luminar’s LIDAR package. It’s not sleek or particularly pleasant to look at like the Tesla’s carefully hidden cameras, but that’s not the point here—it’s the functionality displayed during the test that matters.

Luminar’s Lexus is put through two very important tests to prove the usefulness of LIDAR over a vision-only system. In the first test, the Lexus swerves around a stationary inflatable car while a child-sized dummy crosses the street. From the driver’s perspective, the dummy can’t be seen until its head is just above the SUV’s hood, but the LIDAR spotted it and engaged the vehicles’ Automatic Emergency Braking (AEB) to stop the vehicle before it could collide with the faux-child.

The second test pitted the Lexus head-to-head with a Tesla Model Y. The two vehicles were lined up in lanes parallel to one another, and each one had a stationary dummy placed in the middle of the corresponding lane. The Lexus engaged AEB and stopped, while the Tesla punted the dummy across the pavement.

To be clear, Luminar’s example here isn’t demoing any sort of self-driving suite. It’s showing off LIDAR’s usefulness as an improvement for existing Advanced Driver Assistance System (ADAS) applications, like AEB. Many companies competing in the self-driving space will speak to LIDAR’s usefulness for autonomy; however, the tech’s improvement for other safety features goes widely unspoken, likely due to the system’s exponential costs when compared to camera-based systems.

Some automakers have already pledged to invest in LIDAR. Volvo, for example, provided backing to Luminar way back in 2018 and pledged to offer its tech as standard safety equipment in future Volvos. General Motors also said it would use behind-the-windshield LIDAR units for use with Ultra Cruise.

Tesla argues that its vision-based system is the way to go. “LIDAR is a fool’s errand,” said Musk in 2019. “Anyone relying on LIDAR is doomed. They are expensive sensors that are unnecessary. It’s like having a whole bunch of expensive appendices. Like, one appendix is bad, well now you have a whole bunch of them, it’s ridiculous, you’ll see.”

Nevertheless, it’s blatantly clear that further advancements could be made in existing vehicle safety features like automated braking. LIDAR—whether used for autonomy or not—could provide that tech, but at a significantly higher upfront price. The bigger question is: can automakers and consumers who are potentially buying cars equipped with LIDAR justify the increased cost? 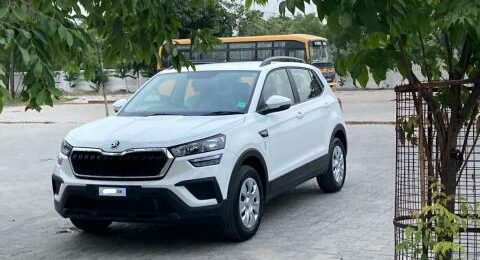