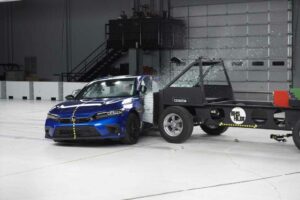 The Mazda 3 sedan and hatchback earned top “Good” ratings, while the Nissan Sentra, as well as sedan and hatchback versions of the Honda Civic and Toyota Corolla earned “Acceptable” ratings. The Kia Forte, Subaru Crosstrek, and Subaru Impreza did not withstand the new crash test as well, earning a “Poor” rating.

The results are a surprise given the physical shortcomings of the compacts and hatchbacks in roadways dominated by taller, heavier crossover SUVs and trucks. Crossovers performed well in the new test, while most mid-size cars failed it earlier this year, suggesting that lower cars would perform worse.

“Smaller, lower vehicles are at a disadvantage when struck by the new test barrier, which is a more realistic representation of the front end of a typical modern SUV than our old barrier,” IIHS Senior Research Engineer Becky Mueller said in a statement.

The new test, meant to simulate a T-bone crash such as when a car turns left at a light and gets struck by another car traveling perpendicular through the intersection, represents the first side impact update since 2003.

One explanation for small cars performing better than larger cars is the smaller passenger cabin.

“Doors tend to be weaker than the B-pillar and the frame surrounding the occupant compartment,” Raul Arbelaez, vice president of the of the IIHS’s Vehicle Research Center said in a statement. “Small cars have less of that weaker space because of their shorter wheelbase and occupant compartment.”

The structure of the 2023 Mazda 3 held up well, and the side airbags protected the driver and rear passenger dummies’ heads from hitting the hard parts of the interior.

The original test had a 3,300-pound barrier striking the test car side at 31 mph. The new test uses a heavier 4,180-pound barrier and a strike speed of 37 mph to reflect the real world trend of larger vehicles traveling at higher speeds. The IIHS also reshaped the barrier strike surface for a lower point to reflect that SUVs have lower car-like hoods. The barrier hits the B-pillar that separates the front and rear seats externally, and the dummies used in both of those seats are modeled after the proportions of a small woman or 12-year-old passenger. The driver side is used instead of the passenger side because there will always be a driver.

The new test reflects a higher standard of safety. The IIHS raises the safety bar and criteria for its Top Safety Pick (TSP) awards, which are coveted by automakers as a marketing tool to demonstrate vehicle safety in a more relevant way than the NHTSA’s outdated five-star crash-test rating system. In 2021, 93% of vehicles tested earned a top “Good” rating in the side impact test, which is one of six crash tests conducted by the IIHS and used in its TSP and TSP+ criteria.

Starting in 2023, a “Good” or “Acceptable” rating in the new side-impact test will be necessary to earn a TSP, while a “Good” rating will be required for a TSP+.