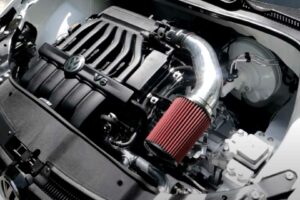 Bring back the VR6.

Do you miss VW’s oddball VR6 engine? Well then, you’re going to like what this VW MK6 GTI owner did to their hatchback. After spending a great deal of time modifying and then fixing his stock inline-4 in his MK6 this VW GTI owner decided it was time to bring back the VW VR6. After two weeks of planning the stock, the motor was out of the engine bay to make way for this incredible final product. Welcome to the VR6 swapped MK6 Golf GTI.

The VW VR6 engine is a legendary oddity that utilizes a unique engine layout all its own. The VW VR6 functions like a traditional straight-6 engine but with a bizarre space-saving twist. The VR6 utilizes a single valve cover and the same firing order as a straight-6 but instead of arranging the cylinders in a straight line, they are staggered into a very narrow V shape.

This interesting design shrinks the overall length of the engine to allow VW to slot a six-cylinder engine into engine bays built to accommodate inline-4 engines. The VR6 was conceived before turbocharging became the best way to extract power from engines with small footprints. The resulting engine was used in numerous Audi and VW products most notably in the VW R32 hot hatch which features a 3.2-liter VR6 engine.

This style of staggered cylinders is also used in VW’s high-end brands like Bentley who build a W-12 which is simply two VR6’s bolted together in a V. Even the Bugatti Chiron’s W-16 engine can thank the humble VR6 for its crazy cylinder count in such a compact space.

Although turbocharging is the clear way to get power into small hatchbacks, nothing sounds quite as good as the VR6 engine. An engine that sounds so good that there’s even a car festival dedicated to its unique sound call Wookies In The Woods.